Skip to content
Home2012December18
ELEMENTARY GRADES ENJOYED  A GREAT TRIP TO FERNBANK
On Thursday, December 13th, elementary students had a trip to The Fernbank Museum of Natural History!  Students saw an I-MAX film all about African Elephants and visited  the “Winter Wonderland” exhibit. This holiday-inspired exhibition features trees and other displays decorated by local cultural partners that recognize celebrations including Christmas, Hanukkah and the Festival of Lights, as well as traditions and practices like origami, indigenous art and national symbols. The exhibition twinkle with lights, glimmer with color, and shine with a variety of cultural ornaments and emblems that recognize the diversity of celebrations, holidays, traditions and events around the world. Everyone enjoyed this and the other museum exhibits before and after the scheduled movie and lunch times. 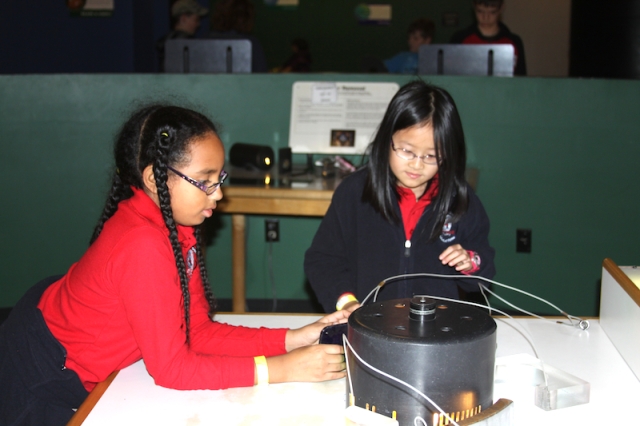 STEWART’S REPTILE  SHOW WAS FUN!
!
Fulton Science Academy Private School has hosted Paul Stewart’s reptile show this past Tuesday, December 11.  From rare geckos to rattlesnakes, students learned about unusual reptiles firsthand.  While there was a “No Touch” policy, getting to see the World’s Top 2 Strangest Water Turtles, a Giant Tortoise, and Burmese Python close up was enough to thrill students. Students had a great time and had all of their questions answered about reptiles.

PHYSICAL EDUCATION CLASS HAD A BLAST WITH REVVED UP KIDS
On Monday, December 17, Fulton Science Academy Private School students took safety into their own hands.  Allison and David Neal along with Dawn Boone from Revved Up Kids, conducted a safety and self defense workshop with the students in PE class.
Several stations were set up where students learned capture avoidance techniques and were able to practice them on the instructors or on the punching dummy. In addition to the physical part of the workshop, students were given information about safe distances, strong voices and strong stances. They discussed what happens when being grabbed around the neck,and how to get away from that choke hold.

Being aware from the start of our surroundings is the first step to safety is something that Allison stressed to the students. Another was listening to your own intuition when knowing something is off or feels strange. “I have spoken to many victims, they all have shared with me that they knew they were going to be attacked but just did not listen to their instincts to get out of the situation before it escalated.” Said Allison. “Listen to your instincts, they are your best first line of defense. They might appear as a fluttering in your stomach, chills, goosebumps, or sometimes you will feel the hair on the back of your neck rise.”

Revved Up Kids has been teaching self-defense to children and teens  throughout Atlanta since 2010. “We were in the process of developing a middle school workshop when Mrs. Teeling contacted us, through one of Fulton Science Academy’s parents.” Allison said, “we were very excited to have the opportunity to work with these students and get their feedback. It is feedback we can use to create a program that is interesting, fun and delivering valuable life saving information at the same time.”
“That was awesome!” One student said…..”I learned some new information about where to hit an attacker.” Another student said “I knew about eyes as a target, but I didn’t know about the ears.” Mrs. Teeling explained that the students just learned about the ears and had discussed hearing loss and decibels.
Some of the feedback was interesting too…some students suggested a video in addition showing real life scenarios, more kick moves because they felt kids would be more likely to kick in self defense more than using their hands.
“I think the students had a good time, ” said Mrs. Teeling, “they liked the hands on or kicking part of the workshop the best, but there was some really excellent real world information given during the short talks. I think the best thing was that students were talking about it amongst themselves or to other teachers, even Principal Sener heard from the students. We all know they wouldn’t say it, if they did not have a great time.”
For more information and resources, please visit following websites:
http://www.revvedupkids.com/documents/parent_resource_ms_workshop.pdf