Skip to content
HomeHands-On Club Traveling Water Experiment
ELEMENTARY HANDS-ON SCIENCE CLUB
TRAVELING WATER EXPERIMENT
Science Club practiced making and recording hypothesis through a “Water Color Experiment”.  Students had 3 cups with 2 of the cups holding colored water. Then paper towels were placed in the cups to form an “m”.  Each group had to make and record a hypothesis about what would happen in the 3rd empty cup. The results were very cool to see! The colors traveled through the paper towel and mixed in the 3rd cup.  Many of the groups’ hypothesis were true! 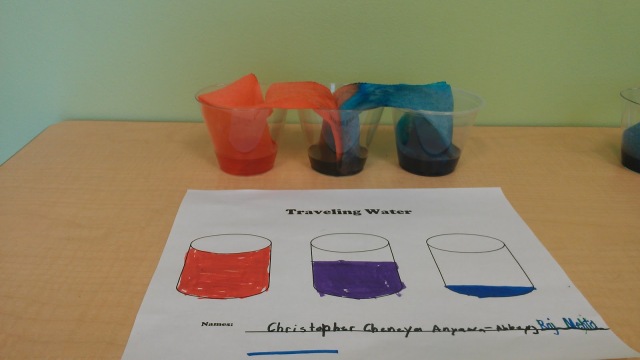 The “Science” Behind Our Experiment:
“This process is called ‘capillary action’, the water uses this process to move along the tiny gaps in the fiber of the paper towels. It occurs due to the adhesive force between the water and the paper towel being stronger than the cohesive forces inside the water itself. This process can also be seen in plants where moisture travels from the roots to the rest of the plant.”

Taken From: http://www.sciencekids.co.nz/experiments/escapingwater.html
This is a great science website for kids!